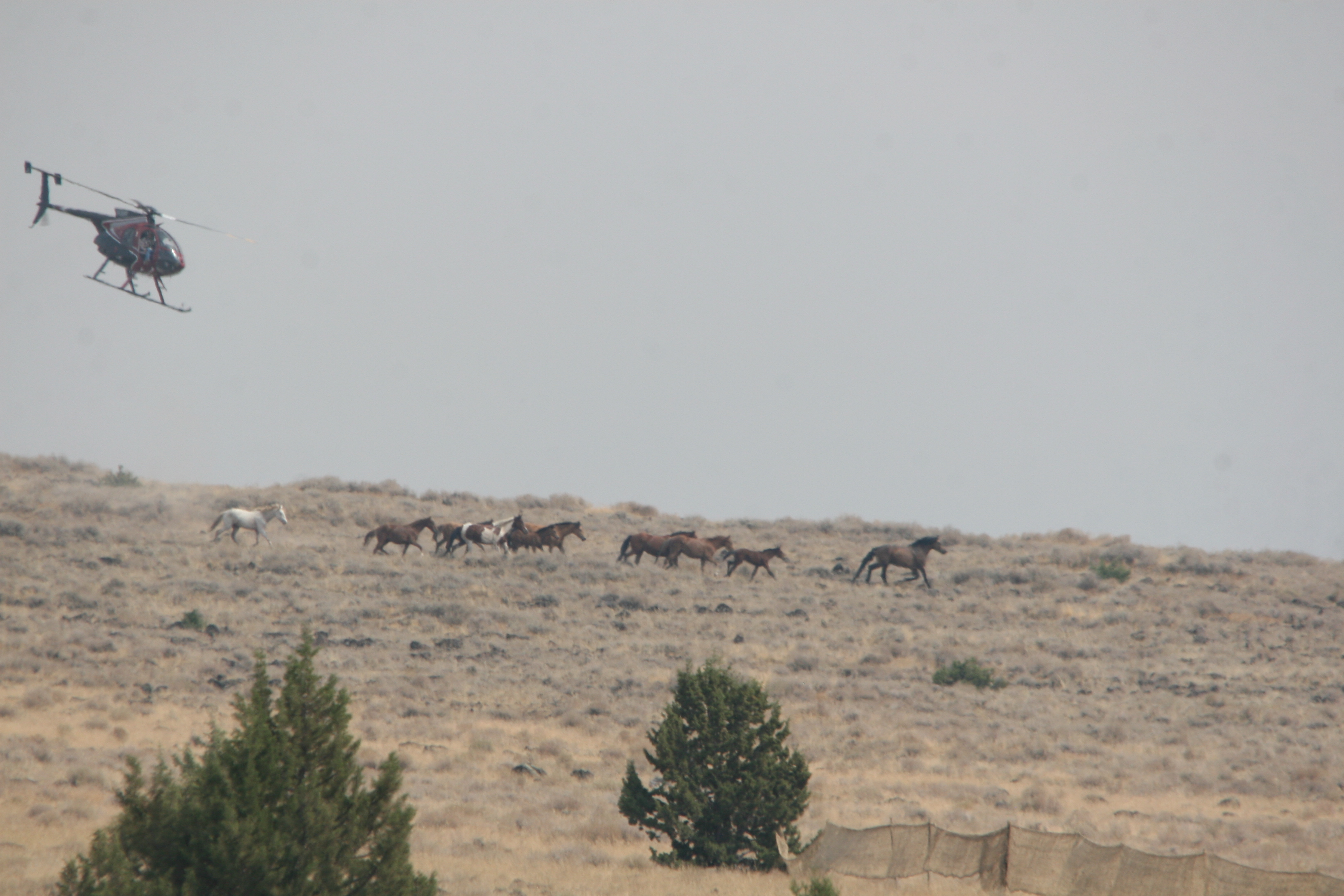 On or about September 10, 2022, the Bureau of Land Management will begin a roundup and removal of the famed South Steens wild horse herd in Oregon about 70 miles southwest of Burns. The agency is planning to remove approximately 500 horses with around 50 to be returned to the range, including up to 25 mares treated with Zonastat-H fertility control.

753 wild horses were captured and there were 22 deaths.

September 15, 2022: 125 wild horses were captured and there were 6 deaths after the BLM euthanized 4 young horses because of partial blindness, a senior mare with a low body score, and a 2-year-old with a broken fetlock.

September 13, 2022: No horses were rounded up today but the BLM euthanized 9 wild horses. According to the agency the reasons were either partial blindness or body condition.

Update: September 13, 2022: We have learned that the BLM is planning to continue with the operation and remove an additional 250 wild horses citing drought.

September 12, 2022: 525 wild horses were captured and the operation was concluded.

Today was another long day, starting early and ended later than the previous days.

This was the last day of the roundup they achieved their quota for this roundup of 500 horses. The day started off with smoke hanging heavy in the valley and it was overcast. Throughout the day it showered on us in short intervals. The smoke obscured much of the view and though the chopper could be heard it was very difficult to locate it.

Our first glimpse of horses was a band that came in on their own, the chopper was still very far out, and this band was leisurely walking up the hill towards the trap site. The group moved passed the trap and disappeared from sight. Around 8:30 A.M the first group came in trotting but as they neared the mouth of the trap the herd split while one group went one way the other went into the trap. The chopper went back out to get the others.

In the meantime the band that had disappeared earlier in the morning came running down the ridge close to us, they passed us and once again disappeared into the trees, the chopper pursued them pushing them up the hill at a walk trot pace maneuvering them into position to enter the trap. This was the second band caught today. The chopper went back out to retrieve the horses that had split off from the first group, they were the third group brought in.

There was a long wait for the last two groups to come in, after the chopper refueled and took a break he was back out. The pilot was moving them slowly towards the trap area, but they did not arrive until around 1:30 P.M. It was a large group and all the horses came in at a walk trot pace. This group came into the trap easily and they loaded easily. One small group of what appeared to be young studs rebelled some at going through the ally towards the trailer, but the wranglers were finally able to get them through and they loaded easily. The last group of the day came in from behind us and though we could hear and see the chopper we didn't see the horses until they came into the wings. They also came in easily.. and as the gate closed the roundup was concluded. AWHC’s field representative was one of six public observers on site.

Another early morning we got to the trap site while it was still dark and took our positions on the ridge overlooking the trap. Shortly thereafter the chopper flew treetop level straight over the top of us to land at the trap site. A short time later he was back in the air on his first run by 7 a.m. the first group of horses started to come in at around 7:37 A.M. They came in slow, only starting to run when the chopper started to push them into the trap. Once inside the trap, they calmed right down. They were loaded quickly in preparation for the second group that was already starting to come into the area.

The second group came in shortly thereafter these were as calm as the first group. The runs were coming in slower than yesterday 7 successful runs in total because the 8th and final run of the day however was unsuccessful in capturing any of the band of 14 that were being brought in.

As they crested the ridge everyone commented on the large bay stallion that was in the lead, each time the chopper would try to push them into the wings the bay stallion would dodge and lead the others away. He did this several times, finally, we thought they were going to come in but the big bay was not having it, he snaked the band into the jute, not hitting it, but he ran them back up the wings to escape.

The chopper headed them off but each time the pilot started them in the proper direction the bay stallion would turn the band and head them back out the trap wings he did this several times. After the chopper headed them off one last time and had them running towards the trap entrance we thought it was done, the Judas horse had been released and was heading towards the trap leading the mustangs in, but at the last minute, the brave bay charged again this time bolting straight up the hill charging through the herd getting them to follow him.

Leaving the Judas horse alone in the wings, it took it several minutes to know that the others were no longer following it and it just stopped in the trap. The chopper pilot stopped his pursuit of the band. Meanwhile, the bay led the band of 14 over the ridge. He stopped briefly at the crest of the ridge and looked back towards the trap he tossed his head and stomped his forefoot and then disappeared over the ridge.  This was the final run of the day. AWHC's field representative was one of five members of the public onsite today.

It was an early morning with a 4:15 AM meet time with the BLM as we had quite a distance to travel to the HMA, we ended up meeting the other public observers at the entrance to the HMA where we continued on to the trap location in the Leuserica area about 8 miles from the entrance.

We passed several small bands as we traveled that were hanging around the main road, they were difficult to see in the dark and only dark silhouettes of them could be seen in the full moonlight.

The trap was built close to the road that we traveled on and our viewing area was very good. We had a pair of bachelors that hung out with us until the sun rose and the activity at the trap site began, they moved off into the tree line, and we didn't see them again.

The chopper could be heard at around 6:42 AM coming from its holding area down at a local ranch.

At 7:20 AM the first horses were brought in at a slow walk, all looked to be in good shape. Two groups followed in short order, one large group split as they ran through the trap wings and bolted over the ridge however their mad dash for freedom was short-lived as the chopper pursued them, they took refuge in a heavy stand of dense juniper trees and it took the chopper pilot quit awhile to flush them out of it, once he did, however, they were moved back into the wings but they turned back on the chopper twice before being pushed into the mouth of the trap, once the gate was closed these horses calmed down fairly quickly.

All of these horses were moved into the trailers quickly and surprisingly easily. There were 9 runs in total today and an estimated 139 horses lost their freedom.

It never got above 90 degrees in the field today so the operation lasted until around noon. There were a couple of horses that broke away from a large group as they were coming in and they bolted over the ridge to reclaim their freedom, they took refuge in a stand of junipers and were only seen one more time as one of them ran back into the wings to join a band running in, only to have second thoughts at the last minute and bolting one final time to his freedom raising a large plum of dust as he disappeared over the ridge.

Several small bands passed by our observation site at a slow curious trot they were no doubt headed to the waterhole on the other side of the ridge from the trap site. When the last group came in they bolted over the ridge the chopper tried to work them back but was unsuccessful at first but he was able to turn them back but they scattered on him again only to be cut off at the ridge and pushed back down into the mouth of the trap, this group came in running.

At the mouth of the trap a bay mare made a last-minute decision and took down the last section of jute as she leaped to her freedom, her forelegs momentarily caught in the material but she jumped free unscathed her blue roan foal of the year on her heels. The chopper pursued as they bolted in our direction, the mare saw us and turned. The bay mare was determined to save the life of her foal and she charged under the chopper as the pair raced back up the outside of the trap wings with the chopper hot on their heels. They raced into the wings and we thought that they were done. But the desperate mare raced on towards the ridgeline, her foal like a shadow at her side. As the chopper came close to them they finally seemed as if it wasn't bothering them anymore, they had freedom in their sights and finally, the chopper relented, giving up on the pair, and they disappeared over the ridge.

With this last run and the chopper landed as the roundup was finished for the day.