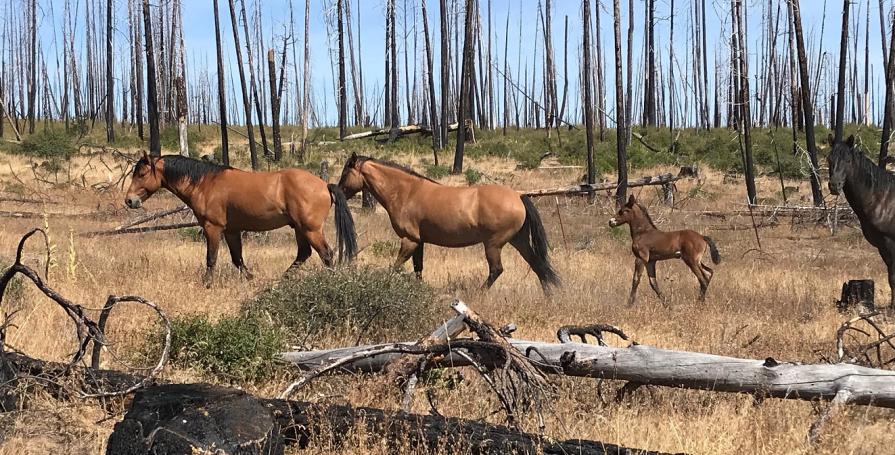 An Update on the Pokegama Herd

An Update on the Pokegama Herd

As of October 18, three horses have been removed from the Pokegama Herd Management Area (HMA) on the border of Oregon and California. The roundup, part of a three-year bait and water trap capture, began on September 26. BLM expects to round up about 200 horses in total. Five horses were removed in 2020 during the first year of the roundup. No horses were removed in 2021. It remains to be seen how many will go this year. So far, two stallions and a mare have been shipped to an off-range corral in Hines, OR.

The Pokegama HMA straddles the border of California and Oregon between Klamath Falls and the Cascade-Siskiyou National Monument. In fact, part of the HMA is inside the national monument’s boundaries. Two cattle grazing allotments cover all of the HMA in Oregon. Significantly, almost 80% of the land within the HMA is privately owned by Green Diamond Resource Company and its subsidiary Green Diamond Management Company - a 130-year-old logging venture owned by the Reed family.

GDRC is the most recent in a long line of corporate logging and timber companies that have laid claim to that land. Predecessors, including Weyerhaeuser, U.S. Timberlands, Inland Fiber, and Jeld-Wendt, allowed the horses to roam the land, but not so GDRC. The company leases land for livestock grazing and claims the horses are consuming grazing forage worth $25,000, and that there isn’t enough left for the livestock.

It’s not a new story but this time there’s a twist.

According to the 1971 Wild Free-Roaming Horses and Burros Act, if a landowner requests the removal of so-called trespass wild horses, the BLM must oblige. The BLM says there are too many wild horses on the Pokegama; the agency estimates about 230. AML is between 30 and 50, so 200 horses taken off this 85,000-acre range? That’s what the BLM is aiming for but the agency says it will only round up horses that are on private land. Unfortunately, the Pokegama horses are not educated enough to know when they’re on private land and when they’re safe, and most of the land inside the HMA is, indeed, private.

The good news is that it’s a bait-and-trap operation, slow-going, and less stress. But, some of the horses on the Pokegama are also privately owned. BLM states that those horses will not be removed and could even be returned to the HMA. According to the BLM’s Wild Horse and Burro Handbook, an agency procedural manual, the term “wild” includes “all unbranded or unclaimed horses and burros that use public lands within 10 contiguous western states as all or part of their habitat.”

After the roundup and before contractors can ship gathered horses to holding facilities, the state brand inspector must check for any branded domestic horses. But, distinguishing unbranded domestic horses from wild ones is a bit more tricky. BLM horse specialists on-site at roundups look for signs in behavior and if horses have been gelded, but domestic horses have slipped through. In this case, BLM may simply give identified brands to GRDC and let the Reeds figure it out. By law, if horses are identified as domestic trespass on GDRC land, it’s not up to the BLM to collect them.

First, Oregon is a “fence out” state, meaning it is up to the landowner to fence wildlife and livestock out of private property. But, it is uncertain if this state law governs wild horses, which are federally protected and managed. In general, checking fence conditions and/or building new fences appears to be a fairly simple way to keep wild horses off GDRC land. Secondly, AWHC would like to see a win-win situation for the horses and for all stakeholders. One way to do that would be to partner with local advocates to restore and develop water resources on the HMA. AWHC also contacted Douglas Reed, GDRC president, in 2020 to discuss leasing the grazing allotments for the wild horses. But, other than an initial conversation with a GDRC employee, AWHC has heard nothing from Reed.

Amy Hadden Marsh, writer and editor, comes to AWHC from an award-winning background in journalism. Amy spent 15 years as a public affairs show host, reporter, and news director for KDNK Community Radio in Carbondale, CO, winning several Edward R. Murrow and Colorado Broadcasters Association awards along the way. She has won awards for her print work from the Colorado Press Association. She has also been a freelance journalist since 1990, publishing in national magazines.